The Impact of Automation on the Workforce

brought to you by WBR Insights

The rise of the robots is threatening workforces in practically all industries, and the financial services industry is no exception. According to a recent study by McKinsey & Company, by 2030, about half all work activities have the potential to be automated by adapting currently demonstrated technologies - though, due to the technical, economic, and social factors that affect adoption, the proportion of work actually displaced by 2030 will likely be about 33%.

These figures chime with a separate McKinsey report, which estimates that machines are poised to take over roughly 30% of work at banks by 2025. Technologies such as AI (artificial intelligence), ML (machine learning) and robotics reduce the need for staff in back-office roles, as many operations can be automated, forcing employees to adapt or find new positions. As Vikram Pandit, CEO of the investment firm Orogen Group, told Bloomberg last year, "Everything that happens with artificial intelligence, robotics and natural language - all of that is going to make processes easier. It's going to change the back office."

Many financial services professionals agree with Pandit's vision - and concerns are rising. In a LinkedIn survey of more than 1,000 retail, bankers, investment bankers, financial advisers, and FinTech professionals, 25% said they thought automation was a threat to their job security. Retail bankers were particularly worried - 34% stated that the threat of automation was a significant concern.

One participant of a Bank Governance Leadership Network (BLGN) summit earlier this year put it like this: "It's a paradigm shift. You will see an exponential increase over the next couple of years. It only takes a few weeks to train a robot do a lot of what an employee does. There could be a cliff approaching. It's really the machine learning aspect that has people screaming about the fourth industrial revolution. The difference between this revolution and the last was that technology had a limit as to how much efficiency could be gained. But machine learning is changing that, and the bots will continue to chase humans up the IQ curve."

Not everyone shares this "automation anxiety", however. In fact, some see it as an opportunity. Much like the advent of ATMs allowed banks to reposition tellers from purely transactional activities to sales and advisory roles, so too could the next wave of the digital revolution free up employees in financial services to focus on higher-value activities, such as client relationship management, idea generation, and research.

As Jamie Dimon, Chairman and CEO of JPMorgan Chase, said in an interview posted on LinkedIn last year: "We have less sales and traders, for example, but more engineers, more coders. These things give us an opportunity to take our resources and apply them somewhere else. We're using bots today and it's not going to stop us from opening retail branches. It's not going to stop us from having private bankers. Or adding investment bankers to countries in Africa that we're not in. We have all these growth opportunities and we're always finding ways to be more efficient. But creating more efficiency creates capital, creates other opportunities."

Dimon expects his bank's headcount to go up within the next 20 years - though others are not so sure.

For example, in late 2017, Jon Cryan, then the CEO of Deutsche Bank, indicated that the bank would be sticking to its plan to cut 9,000 jobs (about 10% of its workforce) by 2020, citing more "machine learning and mechanization" as the reason.

There is little doubt that automation will start to rapidly transform the financial services workforce over the coming years. As such, it is inevitable that more and more technical talent will be required for financial organizations to succeed in an increasingly technology-driven world, and many of today's financial services professionals will need considerable upskilling - even those in a non-tech role - if they are to be able to work more effectively in a digital-first environment. This, indeed, is reflected in the MIT Sloan Management Review and Deloitte Digital's global study, which reveals that 60% of banking executives say that their organization is developing digital talent and driving continuous learning via experiences by working on opportunities across the organization. 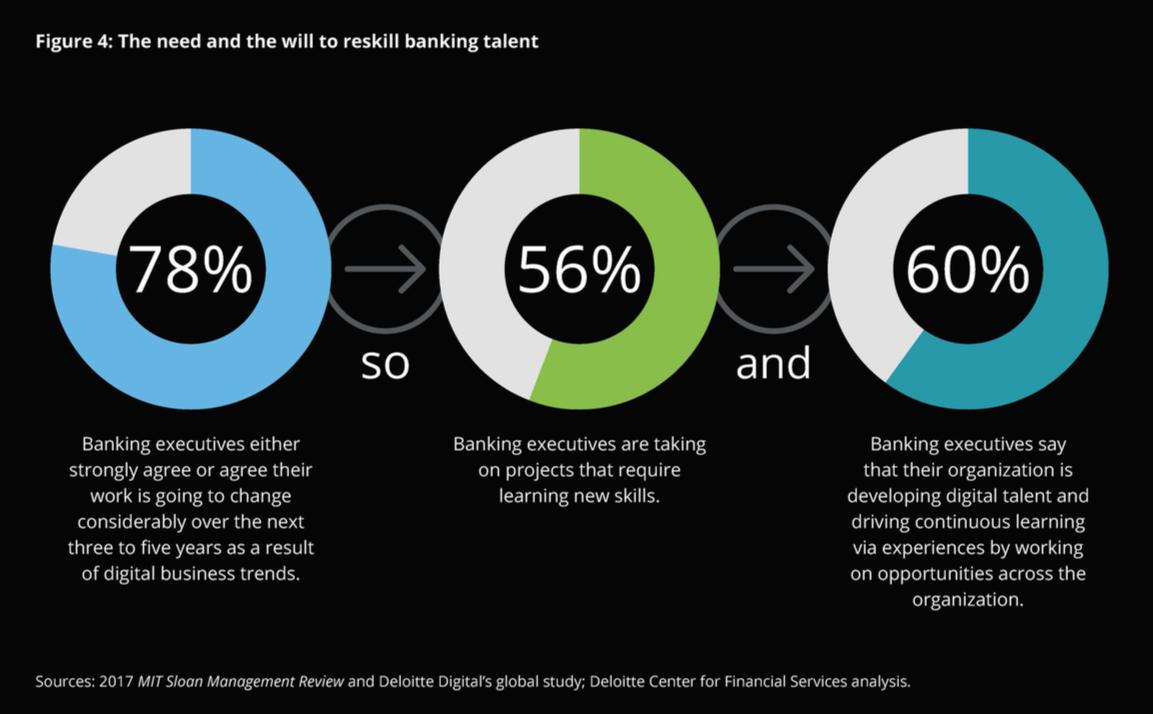 Just how many jobs will actually be lost to automation is still up for debate. For some, the belief is that automation will simply reduce an employee's workload rather than eliminate his or her entire to-do list altogether - it's tasks, not jobs that are automated, after all. Others, however, foresee major redundancies in the pipeline because of automation. Upskilling will undoubtedly be essential but separating the hype from reality will ultimately be one of the key challenges for banking leaders planning their workforce strategies over the years to come.

The impact of automation on the workforce is set to be a hot topic at HRFS 2018, taking place this December at the Rancho Bernardo Inn, San Diego, CA.

*Processing your payment may take a moment. Please click submit payment only once, and do not refresh this page. Doing so may result in your credit card being charged more than once.

We use cookies and similar technologies to recognize your visits and preferences, as well as to measure the effectiveness of campaigns and analyze traffic.
To learn more about cookies, including how to disable them, view our Cookie Policy